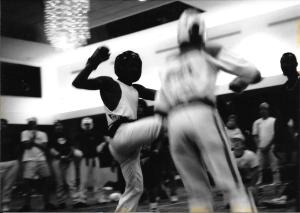 This is me fighting in what I believe had to be my last martial arts tournament, The Battle of the Valley, somewhere between Frederick and Hagerstown, MD.  That’s me on the left and I am fighting a guy named Waymon Beavers with, what was called, the DKT Force One National Karate Team.  This was the fight for Black Belt middleweight championship.

I was able to get a regional ranking in forms my last two years competing.  However, if I had a bad day in forms, I would fight to work off my aggression.  That’s what this is a picture of.  I won my first two preliminary fights handily, but Wayman out pointed me for first place.

A funny side note about this day. There weren’t many people competing in non-traditional forms, so they put the men and women together.  There wasn’t much real competition, but there was a woman who had studied in China.  She beat me in forms and crushed me in weapons.  At that point I still hadn’t mastered the aerial while she was flying through the air with great ease.  So that day I decided to fight.  So at my last martial arts tournament, I went home with three second place trophies.