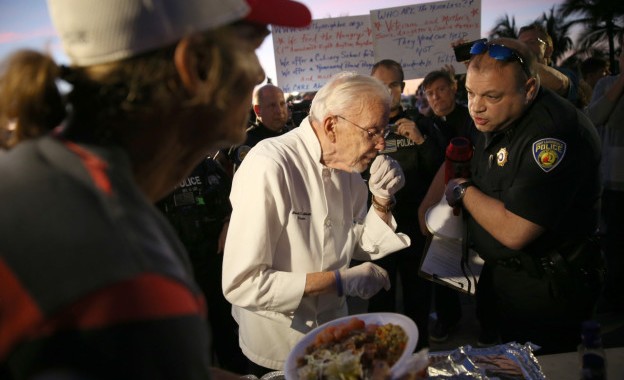 When did big government begin taking food out of the mouths of the homeless?

That’s happening now. The do-gooder welfare state and the regulatory state have gone to war with one another, and the casualties are America’s homeless.

It’s the dark side of nanny-state liberalism.

In Ft. Lauderdale, Florida, a 90-year-old World War II veteran could go to jail for feeding the homeless.

To control allegedly expanding homelessness, officials in that city enacted new laws last October discouraging public acts of charity. For “Chef Arnold” Abbott, who has fed the homeless on a weekly basis for 23 years, the fact that he didn’t also provide bathrooms, hand-washing stations and adhere to city-prescribed food handling rules imposed to make such acts of kindness procedurally difficult means he faces multiple violations that carry $500 fines and six-month jail terms.

According to Abbott, “One of the police officers said, ‘drop that plate right now’ as if I were carrying a weapon.”

Has it really come to this? A man wants to feed the homeless as a tribute to his late wife. He also teaches the homeless food service skills so they may someday get off the street and transform from a taker to a maker. But he’s essentially forced to break the law to help.

Chef Arnold and the hungry of Ft. Lauderdale aren’t the only victims of this nanny state war on the homeless.

In 2013, city homeless shelters in New York City began rejecting private food donations. An edict from then-mayor Michael Bloomberg’s health officials discouraged such donations because they could not be properly vetted for salt, fat and fiber content.

Glen Richter told CBS his synagogue probably donated tons of food to city shelters over the years without problems, adding: “I think there is a degree of management that becomes micromanagement, and when you cross that line… what you’re doing is wrong.”

In Hawaii this past September, thousands of homeless people, particularly those in the tourist hub of Waikiki, were banned from sitting and lying in most places. They could relocate their tents to nearby Sand Island, an area infamous for a Japanese-American internment camp in the 1940s that is known for a water treatment plant today.

Responding to complaints about the presence of homeless people from hotels and other businesses, Hawaii’s Institute for Human Services funded over 100 one-way plane tickets to deport homeless people to the mainland. They are also researching how to discourage homeless people in the continental United States from migrating to the island paradise, as many do.

What’s up with government being so hard on the homeless and those wanting to help them? Some of the most liberal areas in America are now cracking down. People there likely rage against conservatives for allegedly not being empathetic enough about the poor, yet it seems the big-government crowd is more interested in its rules and regulations and perhaps the concerns of the tourism industry than with being compassionate to society’s least fortunate.

The research shows that conservatives are much more outward-oriented and liberals tend toward looking at themselves. There is a sense of entitlement on the left. They are concerned with rights, but not responsibilities.… Conservatives are much more likely to give to charity and they are also much more likely to donate their time to charity. This goes for all income groups and all age groups.

Remember the campaign commercials pretending to show Representative Paul Ryan (R-WI), Mitt Romney’s 2012 running mate, wheeling an old woman off a cliff as an example of his disregard for the old and poor? Remember the Occupy Wall Street protests that said the rich and conservative don’t care about the poor? Maybe it’s time to reconsider these claims. The nanny state certainly isn’t doing the poor many favors these days.

Compassionate conservatism was suggested during the Bush Administration. Maybe it’s time to show it good faith and see what it can do.